Founded in 1999, D-Wave is an industry leader in the development of quantum computing systems, software, and services. It holds the distinction of being the world’s first commercial supplier of quantum computers with a rich history of quality and trust.

D-Wave’s mission is to unlock the power of quantum computing for the world and its systems are being used by some of the world’s most advanced organizations, including Lockheed Martin, Google, NASA Ames, Volkswagen, DENSO, USRA, USC, Los Alamos National Laboratory, and Oak Ridge National Laboratory. The company has been granted over 160 U.S. patents and has published over 100 peer-reviewed papers in leading scientific journals.

D-Wave is a privately held company, with offices near Vancouver, Seattle, Palo Alto, London, and Tokyo.

In the beginning, lab workflows at D-Wave Systems were manual: based on email communication, custom data files, and spreadsheets that tracked information about the setting up of each experiment.

Needless to say, this was slow and error-prone.

The Processor Software Development team, spurred by customer request, set out to automate this manual process. The first iteration was a single-page web application with MongoDB as a backend which served as a testbed for implementation and provided an idea of the time and effort needed to create quality user-facing tools. As this undertaking quickly consumed valuable time and resources, the decision was made to try to find a third-party tool that would spare the Processor Software Development team from the routine implementation of the configuration management database software in order to focus on D-Wave-specific application.

Before adopting and purchasing VisionX D-Wave had trialed several software solutions, some of which are still in place being used by different groups within the organization. However, still needed was a configuration management system that would allow the Processor Software Development team to build the tools to track configuration of the lab equipment from the cryogenic fridge parts down to the quantum processors or experimental devices in the fridges themselves. 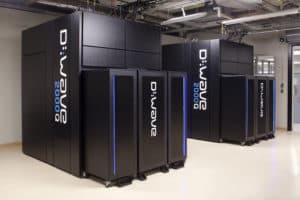 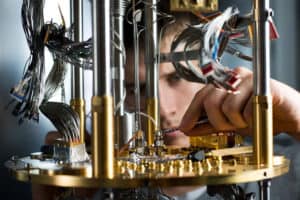 The software built with VisionX is called the Configuration Database. It is tracking all aspects of their processes, including custom devices, such as cryogenic equipment, room temperature control boards, and IO parts that connect those boards to the quantum processor as well as managing the connectivity of on-chip devices.

“We like that VisionX is a flexible solution, allowing us to have full control when we need it and, at the same time, things that are trivial work out of the box without the manual implementation of UI elements or development of an in-house UI framework.”
-Igor Pavlov, Senior Software Developer

In essence, it tracks connections between devices and has templates of those devices, describing their specific properties. The team also documents historical events, such as experiments and their related procedures. Lastly, the system records configurations of specific instances of tracked devices, for example dilution refrigerators or room temperature electronics.

The Benefits of Using VisionX

There was no single reason to pick VisionX. Below you can find some of the benefits the team enjoys by using VisionX.

Summary of the Application Built with VisionX

Build Your Own Applications. Try VisionX.

If you’d like to build your own applications, feel free to give our low-code platform VisionX a try here or request a free demo.

Roland Hörmann is founder and CEO of SIB Visions GmbH and lecturer at the FH Technikum Wien. He has many years of experience in the development of enterprise solutions. His focus of interest is on efficient software development and framework development in the field of classic business applications. He is a regular speaker at Oracle User Group events (DOAG, AOUG), Java User Groups events, and W-JAX.
More by Roland Hörmann

by Roland Hörmann
We use cookies to ensure that we give you the best experience on our website. If you continue to use this site we will assume that you are happy with it.OkPrivacy and Cookie Policy